The construction of the house was begun around 1722 for Provincial Governor of Pennsylvania, Sir William Keith. Originally called ‘Fountain Low” because of its many natural springs, the property served as a summer residence and contained not only the large stone mansion but also a ‘long house” for servants, a barn, a malt house and several smaller dependencies on more than 1,700 acres.

Following a conflict with the Penn family, Keith was removed from his position as Provincial Governor of Pennsylvania. He traveled to England in hopes of securing another position, but died there before he was able to raise funds to either return to the colony or finance his family’s passage to England.

In 1739 Fountain Low was purchased by Dr. Thomas Graeme, husband of Ann Diggs, the governor’s stepdaughter. As a respected doctor, Judge of the Supreme Court, and Port Physician for the city of Philadelphia, Graeme wanted a residence for summer entertaining which reflected his social prominence.

Realizing that little could be done to modify the mansion’s stone exterior, Graeme set about remodeling the interior to reflect the current English style and taste of the mid 1700s. Elaborate paneling was installed in several rooms and fine marble and imported ceramic delft tiles graced the fireplaces.

Dr. Graeme entertained lavishly at the estate. Upon his death in 1772, the property was inherited by his youngest and only surviving child, Elizabeth. Unlike most women of her day, Elizabeth was exceptionally well educated and is credited with hosting America’s first salons or literary gatherings. She was also a woman whose life was marred by tragedy and controversy. Following an unhappy romance with Benjamin Franklin’s son, William, she married a poor Scottish immigrant, Henry Hugh Fergusson.

During the American Revolution, Fergusson declared his loyalty to Great Britain and served with the British during their occupation of Philadelphia. When the British withdrew from the city he returned to England, never to see his wife again.

In 1778, Graeme Park was seized by the colonial government as the property of a traitor and most of its contents were sold at a public auction. Through the help of influential friends, Elizabeth was able to regain her title to the property in 1781.

Mounting debts and ill health, however, forced her to sell the land in 1791 to Dr. William Smith, her nephew by marriage. After Elizabeth’s death in 1801, the main section of the property which included the mansion was sold to the Penrose family, Quaker farmers from the Quakertown area of Pennsylvania. They occupied the mansion until a new home was built on the grounds. They also constructed the bank barn, which now serves as the museum’s Visitors Center. Although the Penroses did not reside in the mansion after 1821, they protected and maintained the building and even gave tours of the house.

In 1920, the land on which the Keith mansion stands was acquired by Welsh Strawbridge. In 1922, he and his wife, Margaret, took up residence in the Penrose’s 1810 house, farmed and raised throughbred horses on the property. They maintained Keith mansion in its original condition, using it for coming-out parties and family weddings. In 1958, the Strawbridges gave it to the Commonwealth of Pennsylvania, thus ensuring its continued preservation. Today Graeme Park is administered for the Commonwealth by the Pennsylvania Historical and Museum Commission and supported by the Friends of Graeme Park. 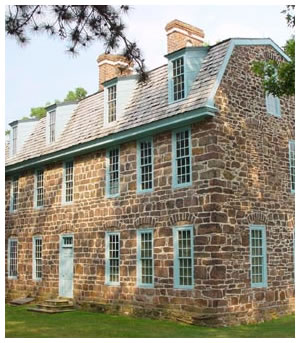