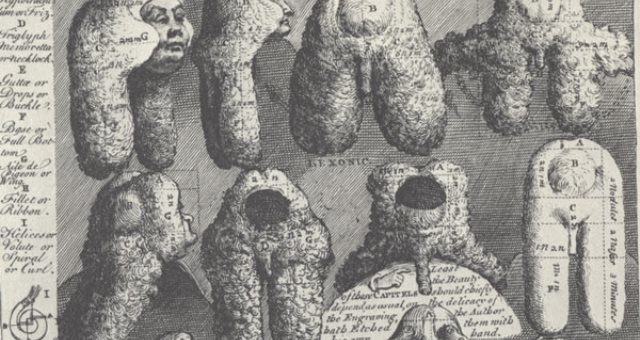 While we promised “now obsolete” occupations in the last post in this series, that doesn’t exactly hold true this time around, although the nomenclature has changed from the exotic “peruke maker” to the more mundane “wig maker.” While wigs date to much earlier times, it was Louis XIII of France who is credited with helping wigs enter “the golden age” that persisted through the 17th and 18th centuries when wigs were worn by royalty and the upper classes who wanted to adopt the latest fashions and show off their style and wealth. The colonial peruke maker used goat, yak, horse or human hair and wove and knotted individual strands around threads, which were then attached, in rows, to a base of netting. The final stages included curling, dying, powdering, and pomades, much as a barber would dress a person’s natural hair. Wigs could be somewhat restyled or recolored to suit new fashions or as a client aged, but new wigs were needed every four or five years anyway. The peruke shop might also sell soaps, perfumes, powders, pomades and cures for lice.