Lunch & Learn: Forgotten Heroes – Women and the Fight for the Right to Vote 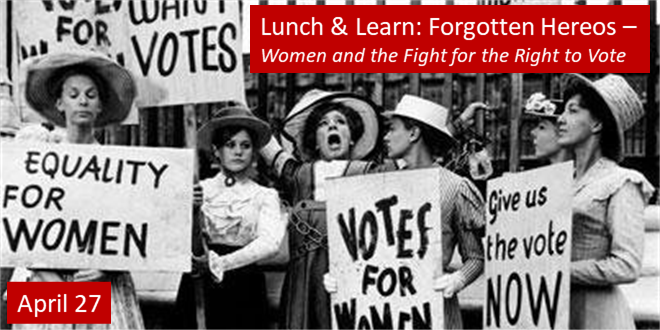 Forgotten Heroes takes the audience on the long 72-year fight for women’s suffrage, beginning at the 1848 Women’s Rights Convention in Seneca Falls, New York and culminating with the ratification of the 19th Amendment in 1920. The program will highlight some of the determined and skillful women who courageously fought to change not only the laws, but cultural and social norms. Pennsylvania’s suffrage campaign to amend the state constitution, named the “Pittsburgh Plan” will also be covered.

The program was developed as part of the League of Women Voters of Bucks County’s celebration in 2020 of the 100th anniversary of the 19th Amendment and the founding of the League of Women Voters. The speaker is Sandra Kerr, a member of the LWVBC’s Speakers’ Bureau, who has done extensive research to inform her presentation. The League of Women Voters is a non-partisan organization, whose purpose is to promote active and informed participation of citizens in government. Its members reach out to the public with information and assistance on registering to vote, candidate information and forums to help voters make informed choices, and studied and developed positions on important issues.

Enjoy a continental breakfast, lecture on the women’s suffrage movement, and a lunch buffet. Tours of the historic Keith House will also be available after lunch. Registration information to come.