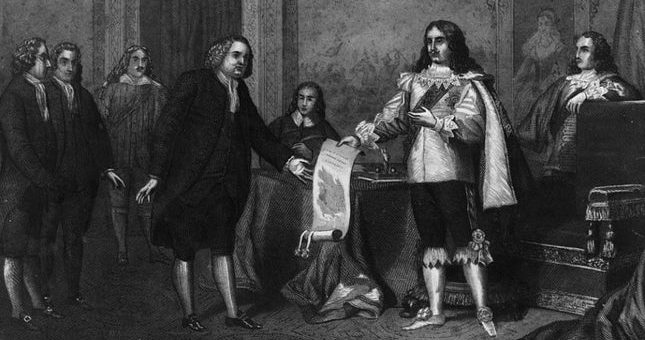 William Penn, a Quaker, was looking for a haven in the New World where he and other Quakers could practice their religion freely and without persecution. He asked King Charles II to grant him land in the territory between Lord Baltimore’s province of Maryland and the Duke of York’s province of New York in order to satisfy a debt owed to his father’s estate. With the Duke’s support, Penn’s petition was granted. Charles signed the Charter of Pennsylvania on March 4, 1681, and it was officially proclaimed on April 2. With this act, the King not only paid his debt to the Penn family, but rid England of troublesome Quakers who often challenged the policies of the Anglican church.

Penn was granted 45,000 acres and, at Charles’ insistence, named the new colony Pennsylvania (meaning Penn’s Woods) in honor of his father, Admiral William Penn. Penn intended to establish Pennsylvania as a Holy Experiment built on the Quaker ideals of religious tolerance, belief in the goodness of human nature, participatory government, and brotherly love. His desire was to create a society where people of different faiths could worship as they chose and actively participate in a government that guaranteed that right. However, while all groups enjoyed religious freedom, the right to participate in the government was actually only extended to Protestant Christians—Catholics and Jews were excluded from voting or holding office. This religious tolerance attracted Catholics, Jews, Anglicans, Baptists, Scots-Irish Presbyterians, and several sects of Germans, who all lived harmoniously.

Pennsylvania’s government was organized into three parts: the Proprietor, who was William Penn, acted as the governor of the colony (or in Penn’s absence a deputy (our William Keith) fulfilled the duties of executive); a seventy-two member Provincial Council, or upper house; and a unicameral Provincial Assembly, or lower house. The right to vote was extended to virtually all free Christian (non-Catholic) men, regardless of whether or not they owned land.

In the 1682 Frame of Government, the first document which formed the foundation of the new colony’s government, Penn wrote:

Governments, like clocks, go from the motion men give them, and as governments are made and moved by men, so by them they are ruined, too. Wherefore governments rather depend upon men than men upon governments. Let men be good, and the government cannot be bad; if it be ill, they will cure it. But, if men be bad, let the government be ever so good, they will endeavor to warp and spoil it to their turn.

Succeeding Frames of Government were produced in 1683, 1696 and 1701. The fourth Frame was also known as the Charter of Privileges and remained in effect until the Revolution.