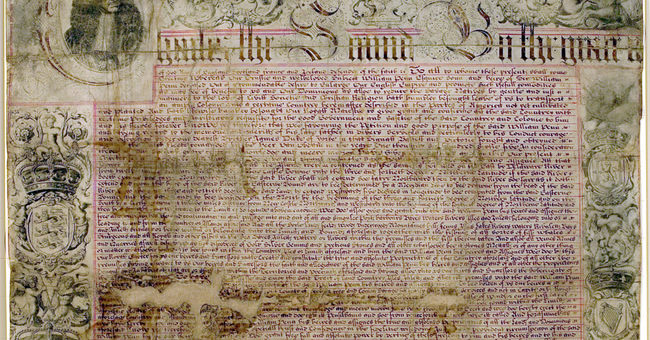 For 355 days of the year the original 1681 Charter, by which Charles II granted Pennsylvania to William Penn, is kept in darkness in a locked cabinet in a locked vault at the Pennsylvania Archives. The cement block room has a chemical fire suppression system and is maintained at a temperature of 55-degrees and a humidity level of 35%. The document is so important to Pennsylvania’s history that in 1997 when it was sent to the Conservation Center for Art and Historic Artifacts in Philadelphia, it traveled under police escort.

Several days before Charter Day (March 10 this year) it is removed from the vault and placed on display at the State Museum of Pennsylvania, where visitors have a ten day window to see it. The four page document was given to the Commonwealth by the Penn family in 1812, and was originally under the care of the State Department. From about 1830 the Charter was displayed at the Office of the Secretary of the Commonwealth. About 5” was cut from the bottom of each page in order to frame it for display. Custody was transferred to the Archives when they were created in the early 1900s and it was put on permanent display at the State Museum from 1965—1984, when, to preserve it, it was decided to limit its exposure to light and to changes in humidity and temperature.

The Charter is printed on sheepskin parchment, and is written in several different hands. It is believed to have taken 4-5 days to complete, therefore different clerks would have worked on it. The pages contain a header (page 1) featuring a portrait of Charles II encircled by the letter “C” and an intricate border of illustrations representing symbols of English sovereignty and important milestones in English history. These borders were preprinted using carved blocks which were inked and stamped along the edges with a blank interior so that these decorated templates were always at the ready.

At the bottom of the pages are holes which would have been used to lace the pages together. It would have then been folded, tied up, and the Great Seal of England placed upon it. The seal was applied on March 4, 1681, thus marking the day it became a legal document; it was presented to William Penn on this day and in this form.

The first recording of the then colony’s name is documented on page 2, where it says “…we do so call it Pensilvania [sic].” I think most Pennsylvanians (at least those interested in history and historical sites) know that Pennsylvania was named after William Penn’s father and was done so at the behest of Charles II. What you might not know is that the name was decided on in the final week before the Charter was legalized. The Archives are also in possession of the final draft of the Charter, dated February 25, 1681, which was the copy Charles II would have reviewed and approved before it was handed over to the scribes to copy—when the writer of the draft got to the previously quoted line, he left a blank space for the name, which was filled in later in different handwriting. Pennsylvania’s Charter is unique in that it is the only one in the western hemisphere to have been granted to an individual.

The PHMC has produced an excellent video, “Behind the Scenes—The 1681 Charter to William Penn” which is available below and on their YouTube Channel.