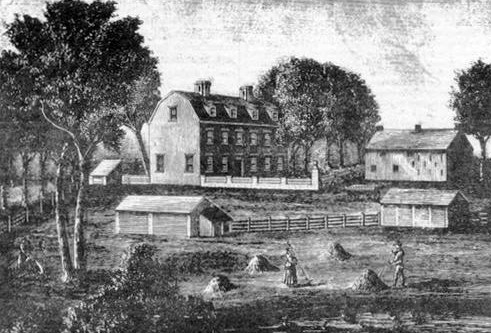 Following is a charming note addressed to Mrs. Strawbridge after a visit to Graeme Park.

Many are the colonial buildings I have examined, perhaps not as many as I would have liked, yet I don’t remember, anywhere, a place where there was such dignity as “Graeme Park.”

I mentioned Mozart to you several times. To me Mozart is the essence of the period. It is the culmination of crisp wit like that of Addison and Steele, the dignity and grace of the cultivated people, the chasteness of those pannelled [sic] walls and dainty mouldings. Perhaps my dream would be to play a Mozart minuet in that drawing room. Maybe then I would be able to make his allegrettos laugh the way they should. I don’t know. I always felt sure I would be able to play a harpsichord if ever I laid hands on one.

When you knocked at the door, (editors note: Mrs. Strawbridge was known for always knocking at the door of the Keith House before entering in order to gain permission from Elizabeth). I was almost afraid someone would come. No matter, how striking a liveried lackey in a powdered wig, or a _____________ host in a figured wescoat [sic], I should be seriously shocked to see one. No one did appear, however, but I could not get the idea of “the Listeners” out of my head and I send to you now. I can imagine a horseman looking up to one of those tall windows, his horse tethered to the fence. Sure there are no turrets, but that is a small matter.

Because of your mention of the brocaded dress I also mail Amy Lowell’s narrative of the lady whose lover is dead. She carries the announcement in her dress. It is a stiff dress and she would be free of it. She thinks of her courtship with a young colonel and a flower strikes the dress and she remembers the letter and the episode of receiving it and of the marriage that will never take place. He was killed in battle. Everything is a design and she is too. Her dress is. The flowers stand in ranks like soldiers, and so does she because of the stiffness of the dress. Again she feels fettered.

There is little I can say about this poem except that it shows the effect clothes have on a person. The lines(?) swish as her skirts dip and sway.The lines(?) are dainty and neat like Mozart. It is an irregular gavotte.

The house was a gavotte too. I almost heard the low sweep of cello, the soaring of a violin, the etherial [sic] flute, and maybe a harp or clavichord. I want to hear a string ensemble there. The listeners would all be listing again and the balls of the lavish Governor would then take place with the ladies curtsying flat to the floor and their partners circling around them. Then the minuet would cease to be an outmoded musical form, a quaint vestigal [sic] remnant kept in later symphonies, and resurrected by Paderewski and the classicist Prokofieff [sic]. It’s all fancy, but what is life without it?

I am now working on a set of short stories, “scherzos” which I merely began some time ago. They deal with music, fancy, and fantasy. I should not be surprised if “Graeme Park” will appear in one of these charming stories. Places and people that make a decided impression on me often do that.