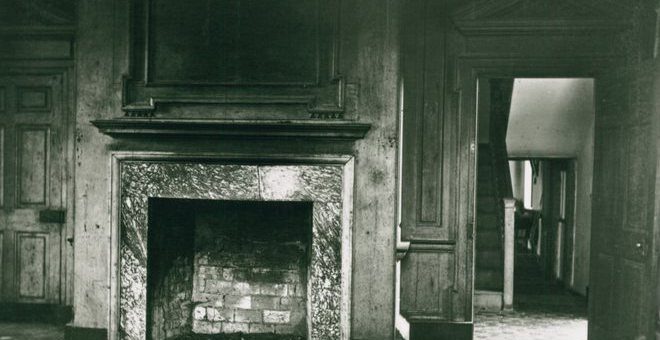 FROM THE ARCHIVES: This photograph of the parlor was taken in 1869 by John Moran and is held by the Library Company of Philadelphia.

John Moran (February, 1831 – February 19, 1902) was a prominent landscape, architectural, astronomical and expedition photographer whose career began in the Philadelphia, Pennsylvania area during the 1860s. Moran was the one photographer among his accomplished siblings. Brothers Thomas, Edward and Peter trained as lithographers and became painters. Moran’s sister Elizabeth married an artist and her two sons became painters.

As early as the 1850s, Moran was a pioneer in advancing photography as a medium of artistic expression. Moran said “In photography, as in any work of art, the merit lies, in the power of seeing and deciding what shall be done…” Moran understood photography could achieve more than merely recording a moment, saying in 1865 “She (photography) can present imagery with a reality and force nearly rivaling the painter, and in some respects, superior.” He often created photographic images working alongside his brother Thomas as his brother painted the same subject view. Moran’s photographs were images that balanced meticulous attention to detail with general atmospheric effects — techniques mirrored in his brother’s paintings.

After 1865, the art of John Moran “disappeared” into collections of photographic prints and historic documents. His seminal artistic photographs were “one-off” (individually hand printed and mounted) albumen prints and therefore limited in quantity. Original John Moran prints are over 150 years old and now quite rare. Moran’s photographs pre-dated rotogravure and halftone print reproduction, so his work was not able to be known by the public on a mass-market scale. Later photographers benefited from having their work printed in magazines, art books and other publications. Consequently, photographers who followed Moran became better known to the public. Moran’s pioneering body of nineteenth-century early photography is being rediscovered, appreciated and collected. In 2010, a Moran albumen silver print set a new auction record for an original John Moran print when it sold for $32,000.

Moran’s 1902 obituary in The New York Times mentioned Moran’s role as “one of the pioneer photographers of this country.” (Information and photo of the artist from Wikipedia)

Additional photographs by and of John Moran below.