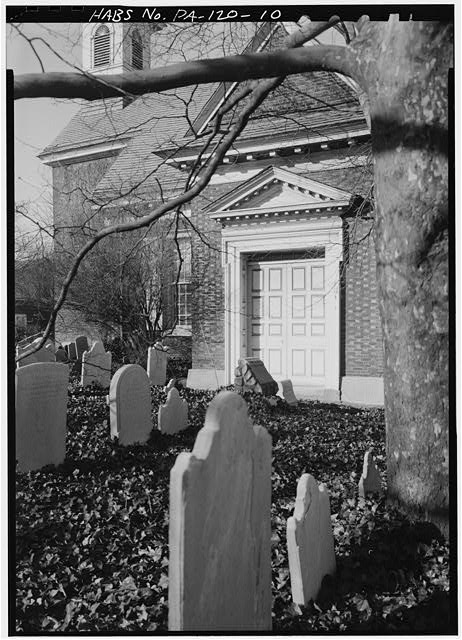 On December 7, 1771 Elizabeth’s friend Benjamin Rush brought a Scotsman named Henry Hugh Fergusson to one of her attic evenings. Well-educated and handsome, Henry did not own property, nor was he in a position to inherit any. This, and their age difference (he was 11 years younger than she) made him a bad match in the eyes of her father, Dr. Graeme. After a brief, clandestine courtship, the couple married at Old Swedes’ Church on April 21, 1772, without the knowledge of Dr. Graeme. Dr. Rush attended the wedding, which was held outside in the garden. It was said that after the ceremony Elizabeth stumbled on a grave and one of the guests wrote that it was an “ill omen for the future,” which indeed it proved to be. 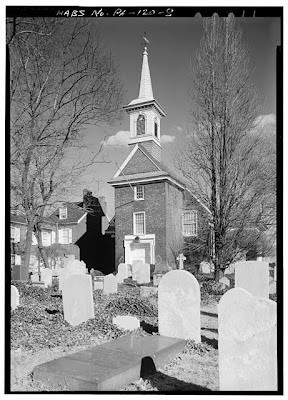 After the wedding, Henry returned to Scotland on family business while Elizabeth continued on in her father’s home. She planned to tell him of the marriage one day in September and while she watched from the window, Dr. Graeme fell, apparently of a heart attack, and never regained consciousness. He died a few days later on September 4, 1772 never knowing Elizabeth’s secret.

In November of 1774 Elizabeth wrote “An Advertisement” after Henry was to spend the day in Philadelphia and remained away for a week without telling her where he was or when he was coming home. While we have no images of Henry, Elizabeth describes him in the poem as tall, blue eyed, with light brown hair and dimples, and while she seems smitten with his appearance, does note that he is somewhat careless about her feelings and doesn’t always look others in the eye. She seems to excuse these flaws as having to do with his youth and feels his virtues outweigh them and that he’ll mature and outgrow his vices. The reference to “Laura” is to Elizabeth; Laura was the pen name she often chose.

Lost, Strayd, or Stollen, from my arms!

Which fills my mind with boding harms;
A Swain, for Husband suits not Rhyme
Yet sure I am that he is mine
As fast as holy Priest can bind
He to his Laura firm is joind!

His height above the common Size!
His look not Simple nor onwise!
Health Blooms vermillion on His Face
Where native Innocence you trace:
His eyes the true Cerulean Blue
But seldom raise to meet your view;
His mouth, But here I know I’m vain
For there a thousand graces Reign
When e’er he smiles sweet Dimples play
Mild as the southern Breath of May!
His Hair the palest Brown just shades
The Brow, and his Complexion aids.


This Modesty– I there may dwell
For sure in that he does excel,
But yet a certain careless air
Makes all His merit seem less fair


A kind of apathy is joind
With Indolence of Mien combind!


(The following stanzas are other fragments of the above poem, in no order)


His years too few, I wont them tell
The numbers would not sound so well,
If eer the writer should be known
At least I would conceal my own.
But let that little Error pass
I cant forget I keep a Glass!


***
Yet that assiduous air to please
That Joy to give to others ease
Which tender Friendship ever Claims
And points with order all our aims
I think you do not find my Swain
Within this Breast all that retain
And tho not void of Social Love
He often does regardless prove.

During the Revolution Henry served with the British, and as a result Elizabeth’s home and property were confiscated. Most of her personal property was sold at auction and she was allowed use of a small portion of her furniture and paid rent to continue living in her ancestral home while it was prepared for sale; the remaining household goods to be sold at the same time. Henry returned to England, and while he wrote occasionally the first few years, was never to be reunited with his wife. To learn the outcome of the story and the fate of Graeme Park, why not stop by for a tour? We’re here Fridays—Sundays.

(The previous, with the exception of the text of “An Advertisement,” was printed in the April-June, 2011 Graeme Park Gazette)