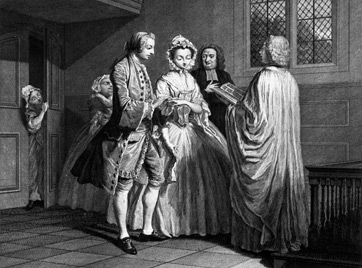 Graeme Park in the fall has its share of crisp autumn air and fall foliage. And looking at our calendar, it certainly has its share of weddings, too. The more moderate months of September, October and November are very popular. Couples find the backdrop of the Keith House and barn the perfect setting for a harvest-themed wed-ding, complete with hay bales, pumpkins and mums. Or not. Graeme Park is a blank canvas for a couple’s imagination. And weddings today are just that. They can be themed, eclectic or traditional.

In the Graeme’s time in colonial Philadelphia, weddings could be lavish affairs for the upper class. But unlike today where anything goes, all followed the same basic pattern.

Though fall is undoubtedly a favored time of year in modern day, in the 1750s, late December, January and early February were considered the most suitable months to wed. This was due mainly because the upper echelon all lived close to one another in the city during the winter. During warmer months, they escaped into the country which caused family and friends to be scattered farther apart. A winter wedding made it convenient for all to attend as, geographically, they were near.

A bride wearing white is a newer tradition dating to Victorian times. In colonial America, a bride would wear any color. Sometimes, the best dress she already owned would be worn. Others might have a ball gown made of beautiful, imported silk. But it would, most likely, be used again and again for social occasions throughout the years.

Today, any and all places can be considered a venue. But colonial American weddings traditionally took place in the home of the bride’s parents. Sometimes the ceremony would be performed in a church but not often.

After the vows were taken and the couple was now husband and wife, the party began. Sometimes wedding celebrations could last for days, depending on the wealth of the family. And like today, sharing a meal with the guests was in order. However, in the mid-1700s, the table spread was fantastic and on-going. On a typical upper-class wedding menu there would be soups and chowders, cheeses, oysters, pig, venison, goose and duck. These would be served with such side dishes as potatoes, bread, Indian cornbread, turnips, carrots, parsnips and cucumbers. And it would all be washed down with tankards of spiced hard cider or punch.

So no matter if it’s a wedding from long ago, today or in the future, some things change but some things will always remain the same. A wedding is an event to celebrate, whatever the century.